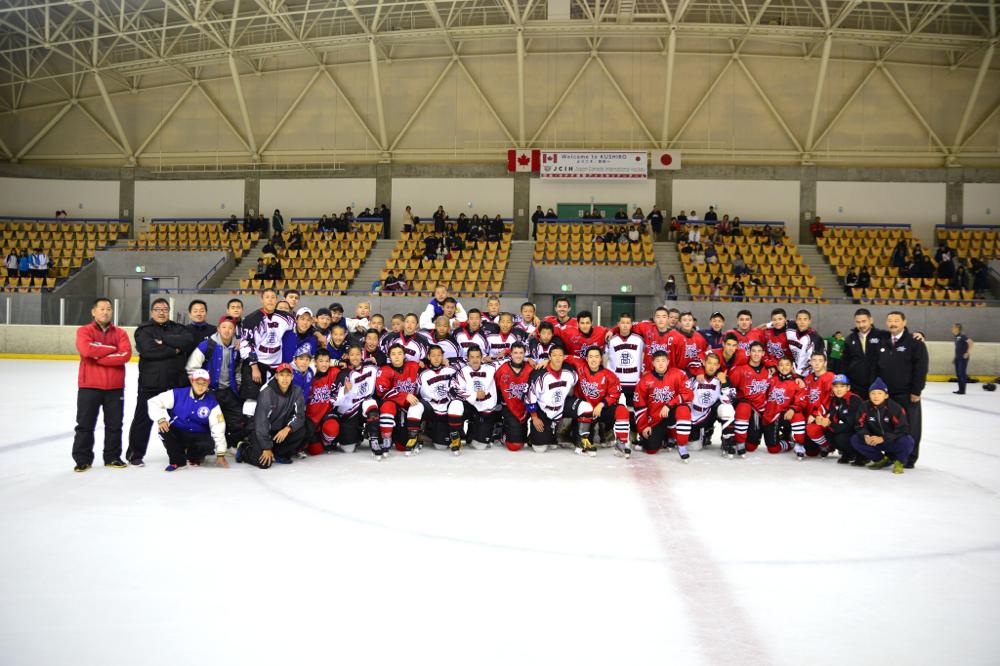 This morning it appears that some of the parents have been invaded by the Kushiro Mist celebrated at the festival. Or it was the fabulous shabu-shabu and sukiyaki dinner with the free-pouring glacier sake and biru (beer-u).

This morning was free time to explore the streets of Kushiro, run some laundry or catch up with emails to friends at home. Frits and Kathy had brunch with their home stay family.

We met the Blades at the Tottori Dome – an indoor tennis facility. Today was sports day Japanese style. The boys helped set up the activities before receiving their red bandanas to identify themselves. Their opponents, who were children from the organizing committee and home stay families, donned white head bands. The national anthems for both Canada and Japan played before the rules of the event were explained.

First test was a 50m dash from a push-up pose facing the opposite direction, which challenged some as the artificial turf was covered in sand and was very slippery. Verhoeven ended with some battle scars on his knee after a starting line wipeout. Next event was something we finally have a (height) advantage at, bean bag basketball (fill a net on a 12 foot pole with bean bags before your opponent does). With Koya on Okino’s shoulders, the Blades finally out scored their opposition!

The following two events baffled the Blades – 3-legged and 5-legged races (groups of 4). Keito and Takahashi were pros; Yee and Koya dragged each other across the finish line. Tug-of-war saw the Asahi Blades face-off against the other kids who had Taki for their anchor. Second round, parents jumped in to out-pull the Blades for a white team win. The team split themselves and duelled in a best of 3 match. To wrap the day and determine an overall winner, relay races pitted the red Blades against team white. This one looked like a guaranteed win for the good guys given the first few foes were 3 feet tall. Always good sportsmen, our kids jogged slowly,
that is until the boys their size began challenging. Kouji edged out Nak to win the tie breaker for team Japan.

Hawkins has a personal fan club that follows him everywhere for pictures; the boys were treated like royalty at their home stays for the night; lunch was at the farmer’s market outside the dome; Aki Takahashi found us today and joined the tour; a Japanese dance school performed 9 dances for us before leading the families through “Sakura, Sakura".

Tonight is Game 5 of the tour against Bushukan High School, a small team of 40 skaters. Before the game starts, it is announced that Bushukan High School baseball just won Hokkaido championships and is going to nationals – a huge testament to the dedicated and talented kids we have met.

Rumour has it that this match will be the toughest so far. Thank goodness the Asahi Blades weren’t told this. Our boys united and hit the ice flying, playing the best period of hockey yet holding the score at 0-0. Exciting scoring chances came from Keito and Kollmuss, Nimi and Takahashi as they broke out in two-on-ones. Okino hit the post on a one-timer from Gilker who was behind the net. The ping energized the boys to keep pressing. Huge checking support from Yee, Kamide, Verhoeven and Napper keep Bushukan guessing.

After the scrape, the Blades maintain their fast pace. Bushukan strikes first scoring a power play goal at 14:11. The forechecking of Keito creates a scoring chance for Takahashi, shortly after he hits the crossbar. Okino has been throwing huge hip checks – #88 has taken to battling him at every turn. The Asahi Blades hit the score board as Kollmuss and Keito send Takahashi on a break away and we are even at 1-1. Bushukan ends the period adding two more quick goals to go up 3-1.

Most of the third period action occurs on penalties. Bushukan gets aggressive in front of Andersson which doesn’t sit well with the Blades. Bushukan scores on a short-handed breakaway (his second try on the same shift). With 5 minutes to play, the score is 5-1 but the boys aren’t giving in. As the first penalty expires on a 5 on 3 advantage, Hoover bangs one in from Nimi and Takahashi. Despite the 5-2 score, all are in agreement that the Blades have achieved a moral victory – exhausted from the home stay excitement, they fought hard and played solid hockey.

Post game on ice picture session includes all the little kids who are spoiled by our boys with jerseys and pictures, and in Hawkins’s case, a stick – the little benefactor could not believe it, he grinned from ear to ear.

The boys are back to the Onsen to regroup and continue bonding. The parents have been dropped at a recommended restaurant, Hatagoya, and have successfully ordered our first sashimi of the trip. Without our trusted guides the Andersson’s, now with the addition of Aki, we would be eating the rice snacks and chestnuts in our bags and Trevor’s never ending supply of candy.

One more jam-packed day with our final game and farewell party.