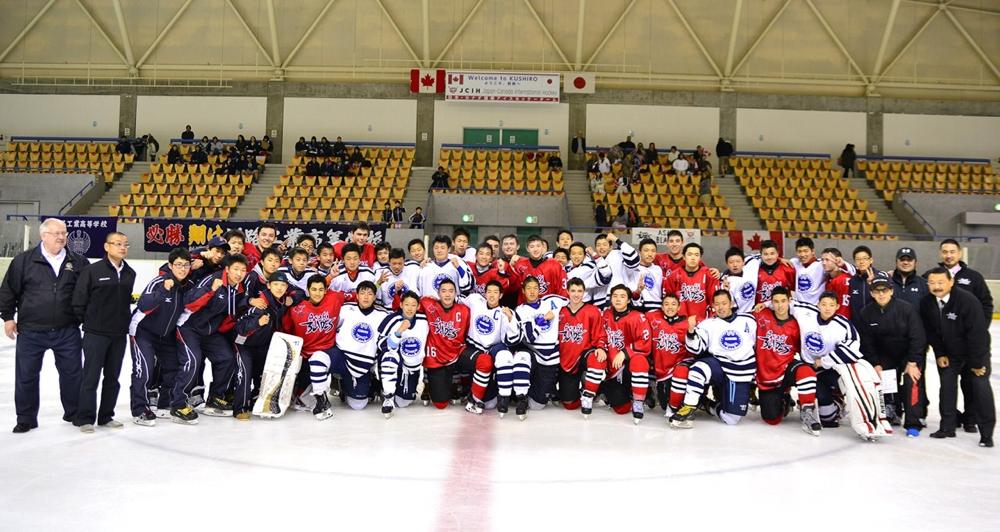 Today, we had a 10:00am engagement with the Mayor. The Blades arrived looking innocent dressed in their beige and whites. Introductions to the Vice Mayor and other dignitaries of Kushiro as well as several speeches were heard.

Larry presented the official invitation to the 50th anniversary celebrations of the sister relationship and a special gift from the Asahi Blades to the Mayor’s office – a framed City of Burnaby medal.

Captain Nimi followed Coach Nak. Nimi spoke with confidence and represented the Blades with pride. A copy of his speech will be posted on the website. At the close of his speech, he presented the Vice Mayor with an official Asahi Blades jersey numbered 946. Why such a large number? The sounds of the numbers spoken in Japanese translate to Ku-shi-ro.

Next official duty of the day was to visit Shinkin Bank. The coaches took Captains Nimi, Gilker and Lee along with photographer Gilker to the thank you ceremony recognizing the Bank’s support of JCIH through their generous donation. Nak’s tight Japanese schedule somehow switched to Indian time as the 20 min visit stretched to over an hour. The ceremony was more formal and had more presenters than anticipated. Captain Nimi perfected his public speaking skills as he delivered speech number two for the day.

Discussions of the night at the Onsen could be overheard while we waited. Kuramoto commented that the bath house is a nice change up; the hot tubs are refreshing but the old men wandering around caught them off guard. The sack of rice pillows leave a bit to be desired. Okino ate 4 bowls of Frosted Flakes for breakfast because it wasn’t noodles.

We made our way to the serenity of the Jyokoji Temple where we walked barefooted in two silent single files like the monks. For meditation, we learned how to sit soto zen style otherwise you will be whacked with bamboo canes.

Next up was the Itsukushima Jinja a Shinto Shrine founded at the beginning of the nineteenth century. We all drank from the fountain and participated in prayer and blessings for the Asahi Blades to play strong for a win – no guarantees though!

We took over a whole restaurant for Ramen lunch. Our group was served quickly and efficiently from three different kitchens – delicious steaming bowls of noodles with rice. Here we parted ways as the Blades headed to Hokuyo High School for their team tour. The Asahi team attended English classes and became subjects of study. The boys introduced themselves to the class then each and every player was assigned to a group of six and interviewed so the students could practice their English. They visited the school’s archery centre. According to Larry, it was along 15 minute hike from the school, so I am guessing it was only 5 minutes.

To pass the afternoon, the families were taught how to identify counterfeit notes at the Japan Bank. Trevor Kollmuss found the many adults snoozing during the film quite entertaining. After a brief visit to the Kushiro City Museum for a private viewing, we made our way to game #2 against Kogyo.

The Asahi Blades take to the ice with Canadian flags flying, thunder sticks booming and white towels waving. Both teams line up for their respective national anthems and the official face off which was won by Nimi. Starting lines are announced and the game begins.

An unfortunate give away in front of our net after a hard fought scramble results in Kogyo’s first goal at 14:00 min of the first. At the 6:08 min mark, a hit on Napper results in the first penalty and a power play for the Blades who still need some work finding their way out of our zone when having the advantage. With 1:18 to play in the first, the equalizer is scored by Takahashi from Nimi and Gilker. First period ends 1-1.

The second period brings more controlled passes giving confidence and creating scoring chances by Napper and Lee in the first minutes of play. The Asahi Blades defensive line is coming up big to support Andersson tonight. We are seeing poke checks from Merlo, house clearing hits from Hawkins, blocked shots from Kuramoto and Okino. A point shot finds the net behind Andersson at the 15:00 min mark to put Kogyo up 2-1. Koyanagi lands the biggest hit so far; not to be outdone, Napper takes the first Blades penalty for sending an opponent to the ice in front of our bench during the last minute of the second period.

Our penalty kill is hot as they successfully fight off two penalties. The team is battling hard and has several fantastic scoring opportunities that they can’t capitalize on. A blue line shot finds the net followed by another quick one and the Blades are down 4-1. Verhoeven is trying to make friends but has left a few unwilling casualties before leading the final charge in the dying seconds of the game.

This match ends 4-1 for Kogyo but our Blades are finding their stride.

The tag-alongs have found their way to MOO for dinner at the Kushiro Minato-No-Yatai (“The Taverns of Kushiro Harbor"). We have adopted the Andersson’s as our private translators and Japan specialists. Without Shiho and David we would be eating at the 7-11…again.