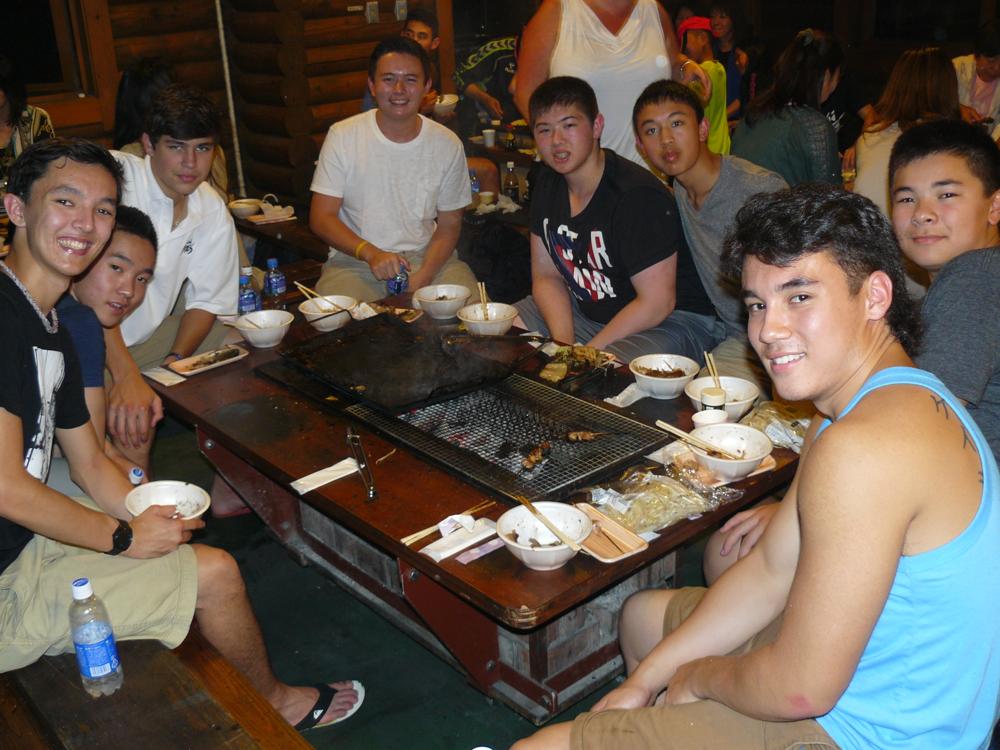 Shopping day today to get those last minute souvenirs. We were met at the mall by the very friendly JCIH Volunteer squad who came out to help us shop. The team was looking tired, apparently a late night was had by all on Team Canada.

After lunch we zipped off to MOO – Kushiro’s Fishermen’s wharf (Granville Island) where we were taught Japanese crafts. The Asahi Blades worked hard at paper crane folding, paper design cut outs (like snowflakes), painting fans and hanging special messages on the bamboo tree. Some of our braver Blades (Merlo, Verhoeven, Nimi, Koya and Kollmuss) found their inner-Samurai as they were tied into kimonos and donned their swords.

Off to the Kushiro Ice Centre for the sixth and final game on our whirlwind International tour. We have finally met a team with a smaller bench (in numbers) than us. Today’s match pits the Asahi Blades against Rengou High School. Anthems are played, official face-off pictures taken and the game begins…in slow motion. The Blades boys take some time to shake the exhaustion of this past week but happily strike first halfway through the period with our very first go-ahead goal scored by Takahashi from Kollmuss. Keito works hard at getting a second one but finds the post and crossbar. As the period is winding down, Takahashi nets another one from fellow line mates Kollmuss and Keito. The Blades leave for the scrape with a lead 2-0!

The teams take to the ice in the second; the Asahi Blades continue their pursuit of a win. Verhoeven’s hard work pays off as he scores from Nimi and Hawkins in the first minute of play. Keito finally finds his groove scoring from Takahashi and Hoover. Not to be left out, Gilker adds a Blades 5th goal on assists from Nimi and Hawkins at the 4:48 min mark. Merlo’s great defensive stick work in the crease along with Andersson’s sharp reflexes keeps Rengou shut out for the first two periods.

Our third and final period of the trip was full of Asahi Blades offence. Kamide sent amazing passes to the front of the net and spent “two minutes in penalty box" for the first time (not sure what for). Napper rushed the Rengou net more than once to help his team. Both Koyanagi and Yee buzzed past the opposition winning pucks on the fly. Okino came to life after hitting the post and chasing the puck back to his own end; then banged in goal #6 from a pass by Gilker. Keito adds the last goal to the tally assisted by Takahashi. Kuramoto handled a two-on-one like a pro in the last minute of play to support Andersson’s well-deserved shut out. The Blades put a 7-0 win on the books! On ice pictures with the families, home stays and volunteers wrapped up the Asahi Blades’ final ice time.

After the game, the Blades and their faithful Entourage (including the home stays) were treated to a Farewell BBQ party hosted by the JCIH committee. We crossed the road from the rink to a log cabin that had 6 BBQ pits blazing and a huge assortment of meat, seafood and vegetables delivered throughout the night that we cooked on our own. Grandpa Hayashi was a BBQ master for our table and a group of 10 players fended just fine thanks to Verhoeven.

Nak had prepared special commemorative gifts of mini Asahi Blades jerseys that he handed out with a unique observation for each player’s time here. Along with the jerseys, Rei brought special wood carvings hand made from her dad who is of Ainu descent (indigenous people of Japan). Special gifts were awarded to all of the JCIH committee members for their many hours of work and dedication to planning our fabulous adventure in Kushiro. Nak wrapped the presentations explaining that the basis of Japanese culture is respect (clean up after yourself so that the next person to use the space will be happy). Nak wishes the boys to take this very important concept of respect away from this trip.

The team has headed back to the Onsen. Here’s hoping it is still standing tomorrow….
The parents hit the watering hole at the Prince but have been fading fast given the early start and long travelling day tomorrow. Kudos to Grandpa and Grandma, they are still here!

Thank you doesn’t seem enough to express our gratitude to the wonderful people Nak has introduced us to during our stay in Japan. Their endless hours, tireless efforts and precision timing for our trip has been so appreciated.