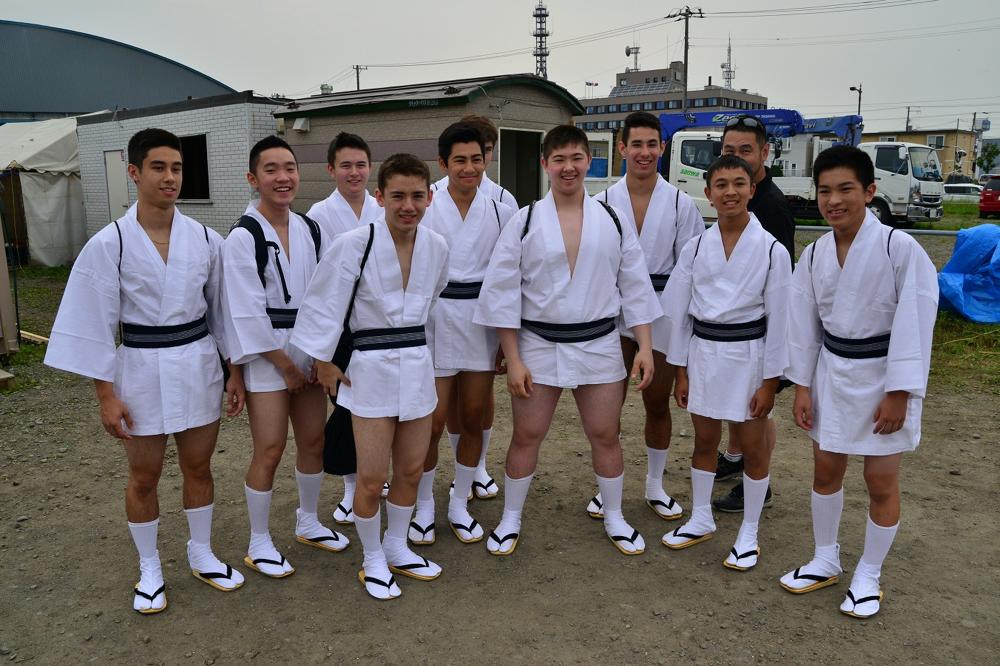 Our two groups met this morning at the Bushukan High School. We donned our green slippers and proceeded to the English classroom for our welcome greeting and daily schedule from two students practicing their English.

Our first program of the day was a Koto performance of three songs. These talented ladies are heading to their championships with the second song played. We were given an opportunity to try out these national instruments of Japan. Koyanagi received applause for being the first to play chords that sounded like music. Coach Nak sat daintily at a koto and gave it a shot too.

Next up was a performance by the Bushukan Taiko Drum Club. We witnessed a heart-thumping 30 min performance before kickin’ it Blades style. After a try, Kollmuss found a greater appreciation for these drums “now that I have tried…it’s hard." The more “reserved" players were coaxed up to the drums and successfully played a few minutes in unison. Well done Hoover and Napper for leading the troop!

As the drumming came to a close, we were confronted by a pack of very intimidating young men dressed in black. They cleared the gym, set up basketball courts, stripped to their hockey team colours and challenged the boys to a friendly match of basketball. The Asahi Blades split themselves into the Talls and the Not-Sos and took to their respective courts to warm-up. Keito coached both sides promoting focus and hardwork to win. After the dust settled, the Talls finished ahead with a score 9-6; Kamide helped the Not-Sos by adding 10 to their score board (after the fact that is) for a final 12-8. Not bad for a pick-up game of barefoot basketball against the fully prepared and overly excited Bushukan hockey team.

The afternoon brought down time to rest and reserve their energy for tonight’s big event. Luckily the weather has cooled. I believe some shopping took place at the Onsen’s neighbouring mall.

Celebrities in their own right, the dutiful family members explored the streets around the hotel to waves and hellos from passing cars and shopkeepers pulling us in from the street to see their wares.

Tonight, the Asahi Blades were the special guests at the Kushiro Kiri Festival, the Mist Festival – a festival started by the youth of Kushiro years ago to help make a positive image of the mist of Kushiro. The boys were dressed in Happi coats and fundoshi by the assistance of helpful ladies. The happi coats definitely made some girls happy….the Blades, not so much. Be sure to check Facebook to see the dressing session.

Coach Nak translated for the team as they were taught how to carry the mikoshi (shrine). They took a ceremonial lap through the festival grounds. Several attempts were taken to dock the shrine in its final resting place at the frustration of the team. Thank goodness they had some local muscle to help them out.

After a quick change to more comforting street clothes, the Asahi Blades are being called to the stage. Kouji has engaged the parents in a game of “Where’s Warry!?" Uh oh, he’s back on Warry time – he warely shows up.

Team introductions have Okino, Hawkins and Takahashi drawing the loudest cheers from the young ladies in the crowd. In the case of Takahashi, most of the cheers were from his own team. Nimi delivered his fourth speech of the tour – he is truly perfecting his Japanese! Like true celebrities, they posed for photos and kissed cheeks as they made their way through the crowd to get dinner and enjoy the festivities.

The evening events ended with a fantastic laser lights and music show, large crowds of beautifully dressed young ladies in their colourful yukatas, a packed dance party, Nak and Tak enjoying some beers in the park, Warry wandering aimlessly, and the parents at their watering hole (the Prince Hotel Lobby chairs).

This morning it appears that some of the ...